Snoring is a problem, but usually not a disease

Snoring is not only a considerable own stress, but also often an intolerable and annoying noise for the spouse. Sound intensivities up to 90 decibels (at 25 cm distance) were measured, which exceeds even the noise from lawn mowers and pneumatic hammers (75-85 dB). Occasional snoring is usually harmless after consumption of alcohol or colds. Snoring accompanied by frequent interruptions of breathing requires treatment, particularly if the concerned person subsequently often feels tired in the daytime.

Snoring is often an intolerable and annoying noise for the spouse.

The main cause of snoring and also sleep apnea is the atony of muscles and tissues in the mouth, throat, nasal cavity. Saggy tissue narrows the air passages to the lungs. When breathing, the air flow through the narrowed passage vibrates the saggy tissue thereby producing the snoring noise. If the tissue is so flaccid that the airways are completely occluded, breathing interruptions occur. Probably, these breathing dropouts exist already as long as mankind. Numerous historical references can be found.

Main cause for snoring: Saggy tissue narrows the air passages

For the first time Australian professor Colin E. Sullivan applied a so-called nCPAP device (nasal continuous position airway pressure), which leads to an overpressure airflow through the nose into the pharyngeal space (Prototypes 1980, serial production approx. 1984). The saggy tissue should be pushed to the side (air splint). He built the first devices with two-stage vacuum suction motors, and necessary nasal masks were custom-made for this purpose. Later he used engines that also dentists used to drive their drills (Vortes Blower Motor). Over the years, this technique has been optimized. The principle “reversed vacuum cleaner” (does not suck, but blows) has remained to this day. Further technological developments include a self-regulating pressure pressure adjustment and breathing air humidifiers. 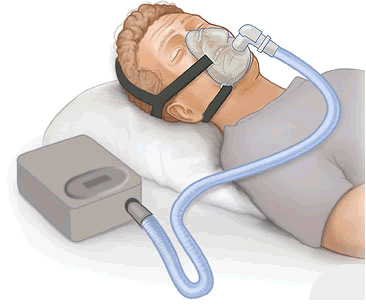 Other symptomptomatic treatments – Splint therapy and others

Most of the other methods and tools, such as splint therapy and various aids offered against snoring and nightly respiratoty disruptions, can be categorized as symptomatic applications. Frequently, these means attempt to change the positioning of the jaw, tongue, and soft tissues. Sometimes temporary effects may occur. There is, however, the risk that other functions can also be influenced, which readjustment leads to new, unintended problems.

Surgeries – Yes or No?

There is no success guarantee for surgeries against snoring and sleep apnea, but at the same time health risks and the risk of remissions. We recommend this only in extremely exceptional cases and if all other methods have no effect. Any surgeries on the human body involve risks. The patient has to be individually informed about this and can only then sign his or her consent. Ultimately, it is the decision of the patient whether he wants to take the risk. A criterion for the layman is, however, often only the speculative evaluation: Is the surgery actually in a reasonable relationship to the desired success?

In its issue of 23. august 2013 the Handelsblatt points out that Germany – measured by the population – is at the top of the general surgery frequency. Surgeries are often much more economical for providers than other therapies.

„There are senseless incentives for cutting, while the means for healing and prevention are missing.“

In reference of surgery for snoring and sleep apnea, for example, the website of the Charite-Berlin (https://www.charite.de) contains the following note:

„Unfortunately, in the past 15 years, no study has been able to determine who the surgery is for. In patients whom is not helped, all the consequences of sleep apnea, such as daytime sleepiness and hypertension, persist. Some patients complain of side effects after the operation, such as nasal speech or the flow of fluids into the nose during swallowing and drinking. In these cases, the quality of life is considerably limited.“

Within a relatively short time, overpressure therapy developed within the framework of the health care to a gigantic and expensive machinery. For a few years, the top 10 ranking list for health care expenditures has been led with distance from respiratory therapy equipment. There are about 400 sleep laboratories in Germany, which prescribe these devices, as well as medical specialists. In many diseases a connection to night-time breathing injuries is presumed, but scientifically verifiable evidence is often not available. The supply of overpressure breathing is considered to be a seemingly royal route in the treatment of sleep apnea. Nevertheless, it should not be forgotten that this method only focuses the symptom, but does not consider the cause.

Finally, this means: The person concerned retains his problem and is regularly checked, adjusted and newly supplied for a lifetime. Expense and burden the technical dependency remain. The costs for our health care providers are growing into the infinite.

The FaceFormer therapy is a cost effective method that aims to eliminate the causes of snoring and sleep apnea. We recommend the application as a single aid as well as accompaniment to other therapies.

Order directly from the developer!

In our online store at Dr. Berndsen medical you will get the complete FaceFormer product range.

How the nose helps us

Due to mouth breathing, viruses, bacteria, pollen and dust can enter the the respiratory tract unhindered. This allows countless pathogens to bypass the most important filter of the body’s defense system, the nose.