Counteracts symptoms at the cause

Symptom therapy vs. cause therapy

Cause therapy addresses the trigger

Cause therapy is the opposite of symptom therapy. It targets the actual triggers of a disorder. If the causes are eliminated, the symptoms also disappear. This is why cause therapy alone is the royal road in the treatment of diseases. Symptom treatments are comparatively subordinate emergency solutions.

There is no symptom without a cause.

CMD is a trendy diagnosis that often starts with teeth grinding, but often only develops into a tangible pain problem after treatment with occlusal splints and grinding of the teeth. It is not the splints (crutches) that adapt to the organ, but the organ system to the crutch. Due to this unnatural influence, “crutch-related maladjustments” and even deteriorations occur with long-term use.

Sleep labs are springing up like mushrooms to detect symptoms such as snoring and breathing pauses and to reduce their severity with machines or dangerous and usually unsuccessful operations. The causes of breathing stops remain for life when therapies with technical aids are used. The use of “crutches” can only reduce the symptoms temporarily. Without these aids, the symptoms immediately return or even increase.

Malposition of jaw and teeth

Crooked teeth and jaw deformities are corrected with braces and wires in childhood or adolescence, only to become crooked again after the treatment is completed and even cause changes in muscle functions that can cause major problems a few years later.

Tinnitus and dizziness, which are countered – purely experimentally – with infusions or tablets, sound generators and autogenic training, nevertheless remain or are eventually cured by time alone.

The specialism in medicine hardly allows us to recognise the seemingly strongly divergent relationships that are under observation in other medical disciplines: The orthopaedist does not look at crooked teeth or a sagging soft palate; the ENT doctor at body statics and the lung doctor at ear problems. Abnormalities that the doctor finds with his own expertise he treats. Accompanying signs that would make the so important causal relationships (causes) clear, however, remain unnoticed.

The FaceFormer therapy method corrects the disturbances of dominant basic functions such as breathing and swallowing. As a cause therapy, it removes the symptoms of health problems at the root. The aim of FaceFormer therapy is to correct the actual triggers of disorders in the long term through a special exercise programme.  It systematically targets those dysfunctions that cause individual signs of illness (symptoms) in the first place. 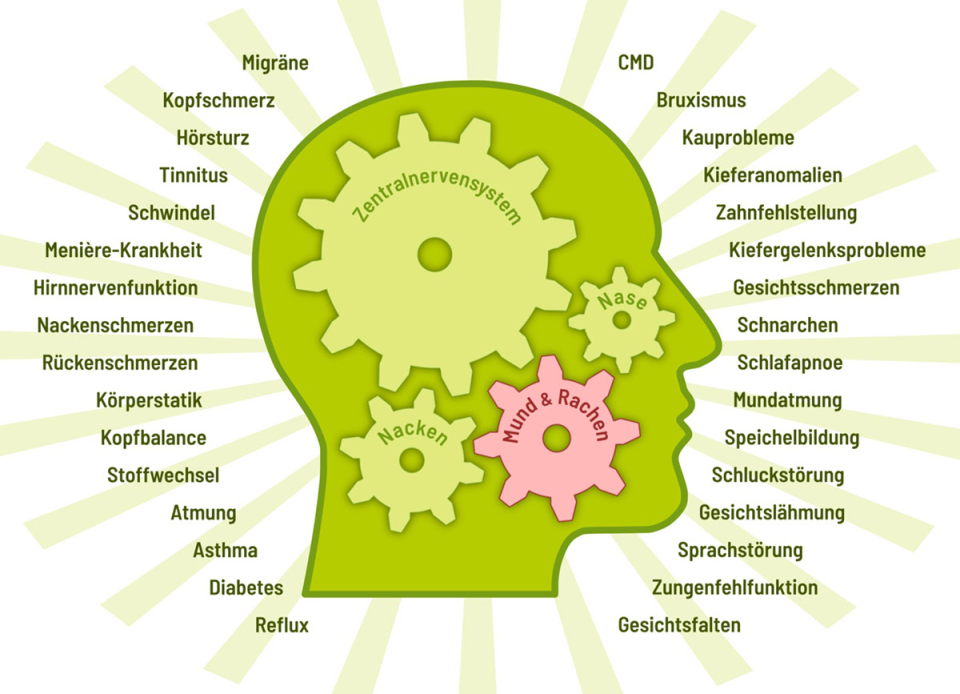 FaceFormer therapy addresses the root causes of many disease symptoms.

Symptoms as a result of functional disorders are of a different nature and different severity for each person affected. Complaints that are taken seriously by patients for the first time, e.g. tinnitus, dizziness, temporomandibular joint pain or breathing stops, are usually triggered by the “weakest link in a functional chain”.

Long before, however, usually in early childhood, effects of the malfunctions have already presented themselves as disorders: The development of malocclusions of the teeth and jaw, frequent middle ear infections, colds and nasal polyps in children are some striking examples. Later in life, ear or hearing problems (sensitivity to noise, hearing loss, tinnitus, gaping tubes), dizziness, neck tension, pain, snoring, sleep apnoea and other health problems are caused by disorders that are rarely noticed.

However, on close questioning and examination, one finds that the patients had to deal with such problems again and again at different stages of their lives. However, the connection to their acute problems were never considered. 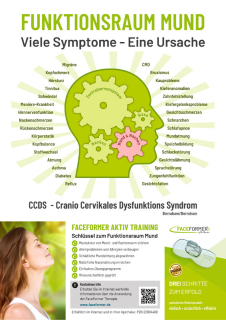 The info poster “Funktionsraum Mund” (Functional space mouth) on Cranio Cervical Dysfunction Syndrome (CCDS) is available together with other materials in the Dr. Berndsen Shop.

FACEFORMER therapy focuses on the two most vital functional systems: Breathing and swallowing. Disturbances of these functions cause numerous diseases that manifest themselves in different symptoms. FACEFORMER therapy corrects and biologically stabilises the system and eliminates the syndrome.

Breathing and swallowing, of course we do both all the time, otherwise we would no longer be alive. It is therefore difficult to understand why these self-evident functions, which run automatically from birth, can be so disturbed that they often cause deviations and health problems in early childhood and subsequently again and again in life. The explanation for this is that incorrect movements and postures can either be innate or acquired through external influences, usually in early childhood. Malfunctions develop with which the organ system can only achieve its functional goal (swallowing, breathing) through compensatory adaptations (evasive movements). Due to the constantly repeating identical sequence of posture and movement patterns, these are learned and stored in the person’s movement memory. It does not matter whether something is offered to the memory incorrectly or correctly. While biological functions do not cause any disturbances, learned incorrect movement and malfunctions sooner or later have a negative influence on the complex functional system and cause individually varying, negative reactions in different segments.

A change to correct functional sequences is not possible without a targeted exercise treatment – FACEFORMER therapy.

Let’s use a simple example to illustrate the connections: Everyone is aware that snoring and breathing cessations are events that occur in connection with breathing. Breathing is our most important survival function and can occur through both the mouth and the nose. Both airways can successfully supply our lungs and further our entire body with the vital breathing gas (oxygen, nitrogen, inert gases).

However, mouth breathing is a poor alternative. On the one hand, it causes the person concerned to snore at night or to stop breathing, often for several seconds, and on the other hand, it is also the cause of numerous other health attacks and even degenerative, life-threatening diseases (see article on mouth breathing). It is therefore plausible and consistent to try to get rid of the cause of mouth breathing instead of spontaneously providing those affected with breathing masks. However, this is easier said than done: the good intention to breathe through the nose is not enough to replace a long-standing unconscious habit with a new automated behaviour. 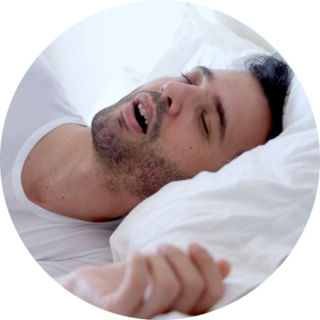 Cause-oriented exercise programme is without alternative

All behaviour and movement learning requires sufficient practice. At the heart of the FaceFormer method is a programme of simple exercises, now tried and tested over decades, which are carried out regularly using the FaceFormer as a training device. There are no similarly effective alternatives.

First of all, the air permeability of the nose is optimised, an important prerequisite for nasal breathing to function and become habitual. In addition, other important functions such as tongue posture, tongue movement during swallowing and head balance are also needed. These are also part of the FaceFormer training programme. Only when the mouth remains closed at night and nasal breathing is safely realised day and night, can the training programme be completed. The cause of the breathing disorder has been eliminated and the user will not need any aids in the future to keep the condition stable.

Like other abnormalities, snoring and sleep apnoea are merely symptoms of an underlying disorder. Once this is corrected, not only do healthy, calm breathing functions return, but other symptoms also disappear in parallel.

This site uses cookies. By continuing to browse the site, you are agreeing to our use of cookies.

The satisfaction of visitors to our website is important to us. In order to better address you, we use cookies. Thereby we achieve that the website works technically reliable and secure.

You can change or revoke your consent at any time.

This data may be linked to user information of users logged in on youtube.com and google.com.

OK, agree with allReject like selectedReject all
Open Message Bar